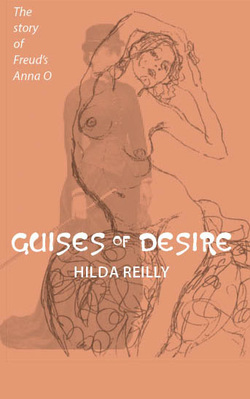 Guises of Desire is an imaginative exploration of the illness of Bertha Pappenheim, better known as Anna O, the ‘founding patient’ of psychoanalysis. Drawn from extensive research of the case and the time in which she lived, this richly detailed novel describes the disturbing symptoms of her mysterious disease, her treatment by Dr Josef Breuer, and her growing pathological attachment to Breuer.

The story takes place in Austria in the 1880s in a privileged but repressive Jewish family where the talented twenty-one-year-old Bertha dreams of becoming a writer and living a free life. When her beloved father falls seriously ill, Bertha cares for him, but then begins to develop a series of bizarre symptoms, including hallucinations, paralysis, aphasia, and altered states of consciousness. Breuer treats her with hypnosis and ‘moral therapy’, the psychotherapy of the day.

Based closely on case material discovered a century after events, the novel brings into question the published version appearing in Studies on Hysteria (Breuer and Freud, 1895). It goes beyond the accepted picture of Bertha as a hysteric whose symptoms were quasi-magically cleared up by protracted discussion. It presents instead a young woman suffering from an unidentified neurological disorder, a repressive upbringing, drug addiction and iatrogenic dependence on her doctor. It illustrates how, despite these handicaps, she was able to emerge some years later, enlightened and empowered, to become a leading feminist, writer and social worker.

"An absorbing and thought-provoking book."
Scientific and Medical Network Review

‘Hilda Reilly has written a novel of immense significance – a must read for anyone interested in the history of psychoanalysis.’
Dr Terry Marks-Tarlow, author of Clinical Intuition in Psychotherapy

‘This is a wonderful stroll through the Jewish culture of Vienna at the turn of the century, holding the hand of 'Anna O,' psychiatry's most famous patient, all the way.’
Dr Edward Shorter, Hannah Professor in the History of Medicine, University of Toronto

‘[Reilly] writes superbly well and is thoroughly informed about her subject.’
Madness and Literature Network

Reilly’s skilful writing and thorough research offer an empathetic portrayal of the vulnerable patient who had an abnormal attachment to the doctor who misdiagnosed her. Dark and distressing, but equally interesting, powerful, and educational.
The Lady

... the sympathetic Hilda Reilly has wrested the famous "Anna O" from the hands of clinicians and made her a whole woman again.
Herald Scotland

'The combination of a vivid portrayal of subjectivity with faithfulness to outer historical detail makes this a gripping story, easy to read, and providing  significant insights.'
Transpersonal Psychology Review

‘This book is a gift to anyone interested in psychoanalysis and the textures of human experience. I was moved reading it and in awe of the breadth of its scope.’
Dr Deborah Serani, author of Living with Depression.

‘Even famous people have day to day lives and it is in the story of their lives that we begin to feel what it might have been like to be in their shoes. Hilda Reilly gives us the gift of Bertha Pappenheim's lived experience.’
Richard Hill, Director, MindScience Institute

‘This is a story, and a message, that desperately needs to be heard.’
Dr Neel Burton, author of The Meaning of Madness 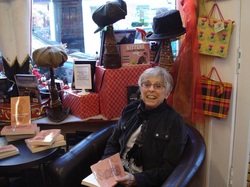 Signing copies of Guises of Desire
in The Bookshop, Blairgowrie
Powered by